The best part of running for city council, is you meet a lot of great people.   A friend was going to introduce me to Ellen in a couple of weeks, but sadly she passed away last Sunday.  So I never met her, but I've heard great things and was looking forward to it.

Ellen's husband Tom passed away six months ago.  So in memory of the both of them, I thought I'd highlight some stories that show how important the Wyman's were to Palo Alto

The Santa Clara Grand Jury found that our Palo Alto Council and City staff circumvented the public process and ignored the city's own policies about leasing of public land during closed-door negotiations over 27 University and 7.7 acres of parkland next to Foothills Park. The city recently responded.

Public officials need to work hard to earn the public trust.  If elected, I will push for openness and transparency to greatest degree legally possible.

Commission: Palo Alto parks struggling to keep up with growth

Thank you Parks and Rec Commissioner's for highlighting this.  As more people move into town, our parks are feeling the stress.  We are clearly lacking playing fields as anyone who's managed a soccer or baseball team knows.  - Tom 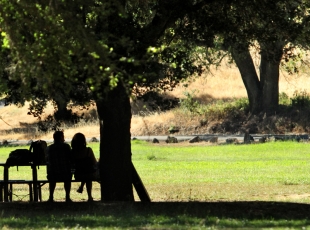 A couple sit under the shade at a picnic table as they look out onto a meadow at Foothills Park on June 26, 2013. Photo by Veronica Weber.
Read more
1 reaction Share

Got the opportunity to meet the nice folks that live on Chimalus Drive this weekend.  With homes backed up to a chemical plating operation, they have serious concerns about deadly, toxic chemicals and safety.  If elected, I will see what can be done to ensure safety, even in the event of an earthquake.

I dropped off my nomination forms and ballot statement with the City Clerk of Palo Alto this morning and swore to protect and defend the Constitution of the US and the State of California.  Let's get this campaign started!

Speaking of naysayers and critics, you may have to include the 59 percent of California voters who just told the Field Poll they’d now reject the nearly $10 billion high-speed rail bond packageapproved in 2008.

The Palo Alto City Council election is still months away, but the race for five seats is already heating up.

This week, Midtown resident Tom Dubois announced his candidacy. Mayor Nancy Shepherd also issued a formal statement that she will run again and Councilman Greg Scharff told The Daily News he plans to do the same.

Tom DuBois, a Midtown resident who jumped into Palo Alto's land-use politics during last year's heated battle over a housing development on Maybell Avenue, announced Monday that he will seek a seat on the City Council in November.

The Case for Gigabit Internet to the Home

For an increasing number of Americans, access to high-speed Internet has become an essential part of our lives. We do work, email friends, find restaurants, watch videos and movies, and check the weather. And the Internet is increasingly used for important services, like video medical consults and online education, and is relied upon by businesses for critical operations.